Flood Mitigation
Five major rivers drain into Tillamook Bay. The lower valleys of the Wilson, Trask, and Tillamook rivers merge to form a broad floodplain at the head of the bay on which the City of Tillamook is located. The Wilson River flows through a steep canyon out of the mountains and does not have any significant floodplain until around six miles above the bay.

The river channel is perched, meaning it runs in a channel with natural banks that are higher than the floodplains around it. Consequently, flood flows that leave the Wilson River, especially to the much larger southern floodplain, never return to the channel but flow south to the lowest part of the valley and west to meet the Trask and Tillamook Rivers. Highway 101 crosses the Wilson River floodplain at grade and so suffers frequent deep inundation across its lowest portions between Hoquarton and Dougherty Sloughs.

Recent decades have seen a number of damaging floods occur in Tillamook County. The 1996 flood in particular was noted for its long duration and extensive damages. Since then, large floods have occurred in 1998 and most recently in 2006 and 2007, causing further damages.

Habitat Loss & Declining Fish Populations
Listed as “threatened” under the federal Endangered Species Act, Oregon coastal coho populations have been severely impacted by the loss of off-channel and tidal wetland habitats. In few places is this impact more pronounced than in Oregon’s Tillamook Bay, where almost 90% of the estuary’s tidal wetlands have been lost to agricultural and urban/residential development.

The primary intent of Southern Flow Corridor-Landowner Preferred Alternative Project (SFC-LPA) is to remove manmade impediments to flood flows to the maximum extent possible in the lower Wilson River floodplain. The project accomplishes this by extensive removal of existing levees and fill. New setback tidal dikes are required to protect adjacent private lands from inundation from daily tides.

Areas outside the setback levees will be restored to tidal marsh. Working with a diverse set of partners, Tillamook County intends to permanently protect and restore the 522 acres of restored tidal marsh habitats at the confluence of the Bay’s two most productive salmon systems, the Wilson and Trask Rivers. Representing 10% of the watershed’s historic tidal acreage and a far greater percentage of the “restorable” tidal lands, the project site contains an expansive mosaic of tidal wetlands, disconnected freshwater wetlands, and drained pasture lands. Once restored to a tidal regime, the resulting range of habitats (including mud flats, aquatic beds, emergent marsh, scrub-shrub wetlands, forested wetlands and sloughs) will provide substantial habitat benefits to not only Threatened coho, but also chum and Chinook salmon, and cutthroat trout.

Long-term ecological and socio-economic outcomes include:

• reduced flooding in the Highway 101 business corridor and adjacent residential/agricultural lands, including measureable reductions in flood elevation and duration;
• improved freshwater and estuarine water quality, including reductions in temperature, dissolved oxygen, and turbidity;
• increased habitat complexity and availability across the range of tidal wetland habitats; and
• enhanced ecological function benefitting other aquatic, terrestrial, and avian species. 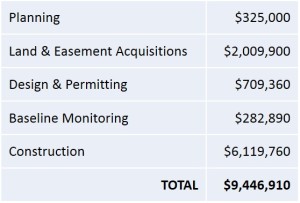